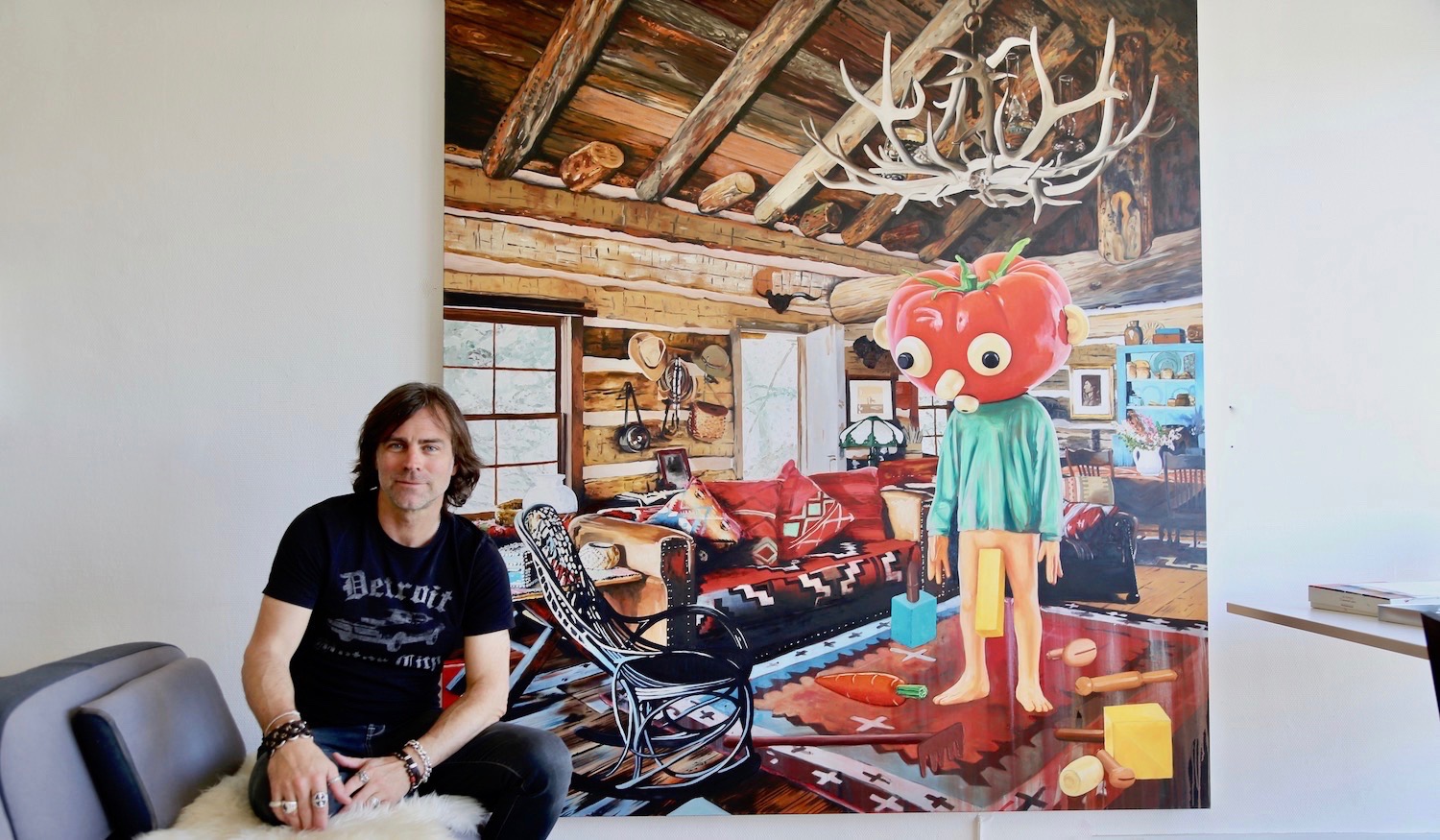 Meeting an artist in his studio is often the promise of a motionless journey, a face-to-face that has a certain intimacy. All the more so when it is conducted in his living room. Swiss artist Stéphane Ducret welcomed us to his apartment in Pâquis to discuss his long and varied career, his experiences living abroad, teaching, and his exhibition entitled “Solo Show Number 1” from the REAL ESTATE series at Gowen Contemporary, among other topics.

Sonia Jebsen: Can you summarize your career as an artist up to today?

Stéphane Ducret: Pulliéran by birth, I moved to Geneva in 1990 to study at HEAD (School of visual arts at the time). In 1999, I left for New York to live my American dream! In the Big Apple, I nourished myself culturally by going to museums, theaters, concerts. I hadn’t left to work, but mostly to develop my painting. Then the 2001 9/11 terrorist attack created a personal and global shock. I had a front row seat in NoLita. It was time for me to take stock, with my finances not looking good. I left the States to discover the beautiful city of Porto for six months. Then I returned to Geneva for four years during which I worked at ECAL.

Attracted by the very European and trendy Buenos Aires, I moved there in 2006, and an intense period of life followed. Unfortunately, it is a country ravaged by corruption and after a few years I didn’t like it anymore. In 2012, I went back to Switzerland. I tried out the profession of gallery owner for a year but without success. In 2016, I had too much pressure, too much work, and burnout knocked me out. I no longer felt credible as an artist. Maybe it was due to a lack of recognition, but I also had to go through a self-criticism of my work: was it any good?

Sonia Jebsen: Which artistic movement do you associate your work with? And how has your style evolved?

Stéphane Ducret: My work today is very much in the “appropriationism” movement initiated by the American Elaine Sturtevant. She was very inspired by Andy Warhol by copying his works from memory. Artists like the American Richard Pettibone or the Genevan Sylvie Fleury, whose work I acquired 30 years ago, have an impact on my creativity. My paintings tell different stories, starting from the original artwork I was inspired by, and putting it into a different context.

My youthful references were Monet and Warhol. During my studies at the School of Visual Arts, my work changed every six months because I quickly got bored of a style. That’s why looking at my paintings from this period reveals the influence of Keith Haring, Ellsworth Kelly, Baselitz, and many more.

Sonia Jebsen: You are currently exhibiting at Gowen Contemporary in Geneva. What is the theme of the exhibition?

Stéphane Ducret: The “Solo Show Number 1” hanging consists of 10 canvases and around 20 drawings illustrating my work over the past three years. After a long break, in March 2017, I got back to work. The project: large-scale works (208 × 188), which is my favorite format. Using the oil to mimic other techniques like spray or neon, it was a real challenge for me. It took me almost seven months for each painting!

Their titles refer to the authors I was inspired by and they are preceded by the hashtag symbol (#BruceNaumann #AndyWarhol). A nice nod to the social networks that are very present on a daily basis. “REAL ESTATE” is a term for the succession of artists, used in the art world. In the show, the drawings exhibited are subsequent to the paintings with which they have a dialogue.

Sonia Jebsen: You created ART CLASSE, a painting course, which highlights your qualities as a teacher. Why and for what purpose?

Stéphane Ducret: In 2016, it was above all a way of earning a living. My teaching skills allow me to easily transmit my knowledge and my experiences to the public. In New York, I had met the painter Rudolf Stingel, who wrote a manual explaining his painting technique in five or six steps. The conclusion: by following clear instructions, anyone can create a contemporary work of art similar to the original.

I took the concept of ART CLASSE from there. The REAL / FAKE workshops quickly became very successful. They are aimed at a large audience. During the lessons, I present the approach of an artist and one of his works. Participants create a “true / false” of the original over a three hour period. Thanks to the workshops, I explain what an artist is at a conceptual and pictorial level. Among the big names you find Gerhard Richter, Andy Warhol, Basquiat, Rothko, Jackson Pollock, Joan Mitchell, Yayoi Kusama and many others. A majority of Americans because they have dominated the market by 60% since the end of World War II.

Sonia Jebsen: A small question, like the icing on the cake…Can you name a favorite artist?

Stéphane Ducret: Difficult to choose, but among contemporaries, I admire the drawings and all the work of the American Paul MacCarthy.

Stéphane Ducret: Let’s stay local, the MCBA of Lausanne. It is enjoyable to walk around this museum. Both architecturally and through the exhibits presented!

Sonia Jebsen: A definition of an artist?

Stéphane Ducret’s show “Solo Show Number 1” is at Gowen Contemporary until 8 May, 2021. 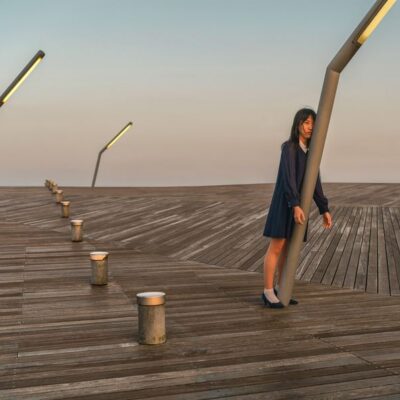 Born in 1972, Nicolas Boyer was educated at Sciences Po Paris and HEC before he trained as a photographer and cameraman at the École des Gobelins. Photoreporter between 2003 and 2005 for the French and international press ( Libération, Le Nouvel Obs, Paris-Match,... 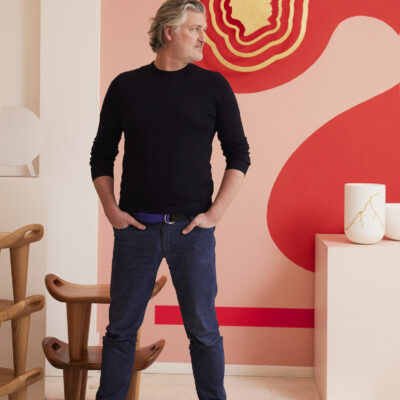 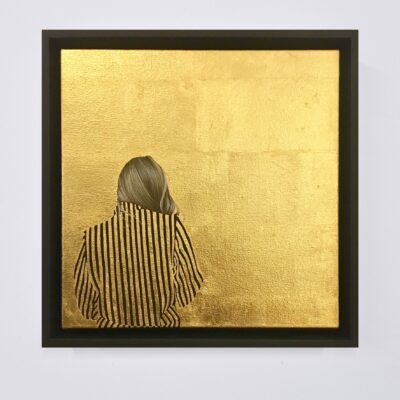 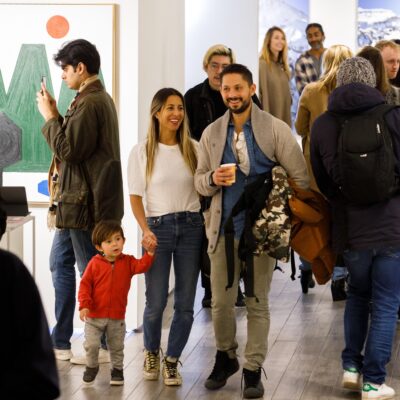